Another morning and another chance for bread rolls and cheese for breakfast. I hate to say it but I am in desperate need of a different breakfast. They do have cereal, and yoghurt here but I’m not a fan of either.

We met out guide for the day, Rob (who grew up in Australia) outside the hotel, split into two groups and headed off for a 3 hour walking tour to see graffiti and street art and learn about it’s origins, history and the people who make up this unique culture. And we came away with a different appreciation of all three. I took quite a bit of video today and as I can no longer remember hardly any of the details I’ll just share some of the photos. Kevin & I both decided we can appreciate and enjoy street art but are definitely not a fan of graffiti.

We also learnt about the different styles (like stencilling shown below) and how artists do the higher pieces. Most the of the larger, full wall pieces were actually commissioned by the the suburb.

My favourite place was this alley which used to be part of a factory owned by a Turkish man who helped people escape during WWII.

Nowaways there is an Anne Frank museum (though, of course, Anne Frank never lived or came here).

Another fascinating story involved this old house where a Turkish Muslim man still resides and is provided with water from the Catholic Church across the road.

Much to our relief there was a lunch stop at YAAM – which is a rather interesting Jamaican beach bar/area in the middle of the city.

This little birdie was singing along with the Jamaican music and was too cute.

Lunch was yummy. Kevin had jerk chicken and I have no idea what I had but it tasted pretty good.

After lunch Kevin set up a little charging station, as you do!

Then it was back on the streets to see the westside gallery – street art on the Berlin Wall.

This is apparently the most famous piece here and is of the two leaders of East and West Berlin who after shaking hands actually hugged and kissed each other full on the lips.

Kevin had actually been reluctant to come on this tour but he had lots of fun chatting with Rob, our guide. I bet Kevin never would have guessed his new best friend would be a graffiti artist :-). Kevin was really impressed with how knowledgable and well read Rob was.

In amongst all our walking we did catch a few trains, a bus and even the tram. There was more street art. This one is for Christy…

And one of Charles Manson, with a message about consumerism. As you can see many of the pieces are just amazing.

We were all starting to drag our feet by now and glad to get to our workshop. Even though it was in a rather shady looking buidling. 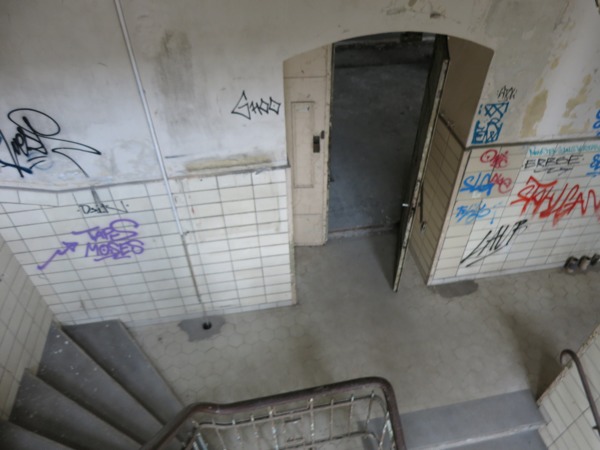 Here we got to choose and cut out a stencil. Boy was this fiddly.

Then we got to use spray paint. As you can see I wasn’t very adventurous but I’m happy with how it turned out. While I enjoy Art, I’ve never been very good it at!

We weren’t in Amy’s group today but she said she really enjoyed it, both the tour and the workshop. She’s keen to get some spray paints when we get home.

The kids also got to do a “tag” on the wall. Any guesses what Amy wrote? I guessed correctly.

There was more walking, a tram and two trains and we finally made it to the Hard Rock Cafe for dinner.

I had the veggie burger (there is a patty hidden in there somewhere) and it was delicious.

We were also given ice-cream but I was too full to eat much of mine.

While the kids visited the shop, Kevin did some climbing…

to get a photo of the new Apple store which is opening in early May.

Then it was back onto the trains. I’m still surprised when I see a dog on board.

Finally after an incredibly long day of the walking (two of the teachers were in a serious amount of pain) we made it back to the hotel. Kevin estimates we walked about 25kms.
Kevin was kind enough to go and put on load of laundry for me – I only have 2 pairs of pants and wanted to get both of them washed. I did a bit of organising while we waited for it to be finished.

Tomorrow : A train trip to Nuremberg