I was awake this morning at 4am (normal for me at the moment) but unfortunately it was after just after 5 hours sleep. I watched a little YouTube before editing my Vlogmas video for yesterday, then it was time to shower, dress and get on with the final packing and list of jobs to be completed. I actually had plenty of time so didn’t need to get too stressed (though I’m sure I did a little) and before we knew it was to take our luggage down to Nan & Pops (my Mum & Dads) to wait for our pick up. The dogs are staying at their place, but since we’re all going away (this cruise is a Christmas present from my parents) we had organised for some family friends to stay look after the dogs.

Right on the dot at 10.30 our mini bus from Kiama Leisure Cars arrived to pick us up. I tell you it was a little hard finding someone to take us all to the Cruise terminal ( esp. being that we’d only booked the cruise 8 weeks ago and it’s peak Christmas party/travel time). It was a very average trip up the Sydney and I first spotted the ship in Circular Quay around 12.15pm. 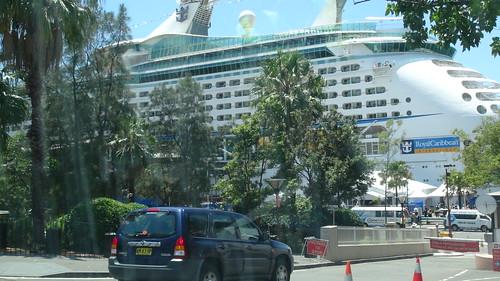 Unfortunately it was a bit of an ordeal getting onboard (not bad, just not a smooth as we cruise out of Florida). First our mini bus had to get in line to drop us off, then because we had been upgraded (for the bargin price of $300) to a Junior Suite we had been unable to print up our luggage tags (the ones online had our old room numbers) so there was a bit of waiting while this was done, then the long walk (and more waiting) to check in. I actually had to help an older lady who was REALLY struggling to push her husband in a wheelchair and handle some hand luggage as well. Struggling is an understatement as she couldn’t do it – I understood why when I pushed the wheelchair as it was rather heavy. Of course, checking into two cabins (even though we had checked in online) took time!! Then finally we had security – and of course, we had issues there because of our power boards – which you are no longer permitted to have onboard. Strange indeed as we’ve always had them before. 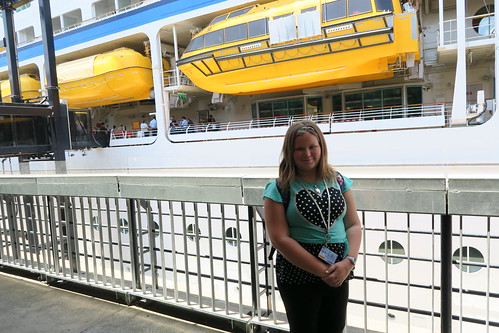 Finally, and feeling slightly frazzled, we were onboard, had photos taken, then since the whole thing had taken over an hour we were able to head straight to our room. We first went to check out the girls promenade view room – which is really nice for an inside room. 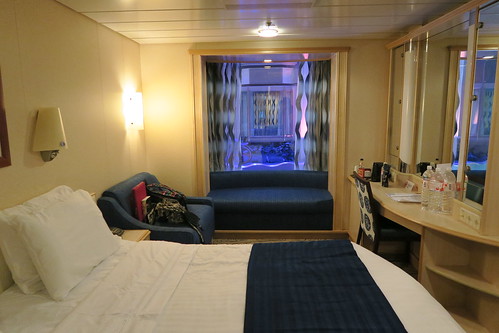 Then we went to check out our Junior Suites. We are on the other side of the ship and 3 floors up. The junior suites are amazing. So much room and it’s great having so much seating – esp. since we are a group of 6. 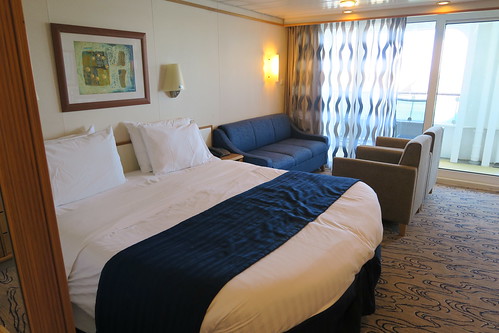 And we had quite the view from our balcony. 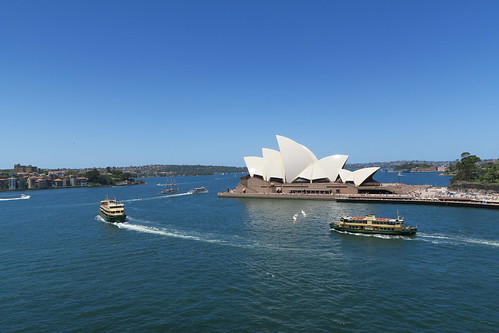 We were all very hungry by now and headed to Windjammers for some lunch. Unfortunately I wasn’t feeling the greatest but felt a bit better after eating. We went for a little explore of some of the ship, then because I wasn’t feeling the greatest (and Nan was needing a rest as well) we went back to our cabins. Our luggage had arrived so I able to unpack before having a little rest then going to have a chat with Nan & Pop in their cabin. Before we knew it is was almost 7pm and time for sail away.

We got a little mucked up here and were still getting our traditional mocktails (and a snack since we were hungry again) when the ship actually sailed. And poor Kevin was back in the cabin waiting for the girls, who had found us on our way to get food. Then where we sat had glass so I couldn’t get good photos or video so I had to race up a level to do that. 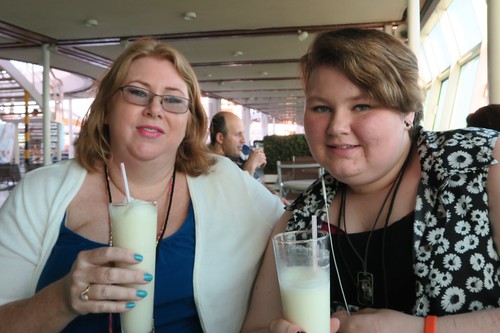 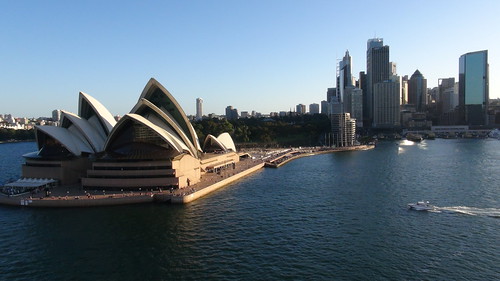 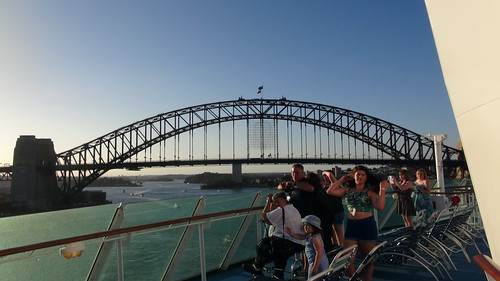 We also discovered that we were in the smoking section :-(. So we had to move. Amazing quickly were we going out past Sydney heads, and it was thankfully very flat (for Nan’s sake). 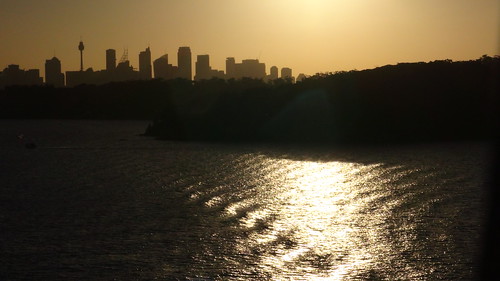 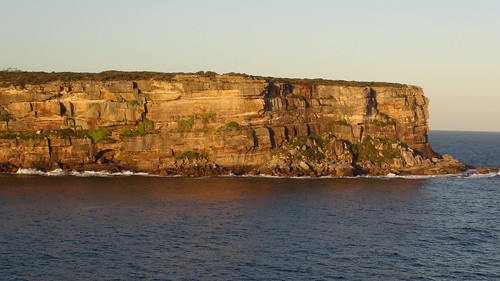 Time to go to the theatre for tonights show – which was just an intro and a comedian – who I quite enjoyed. 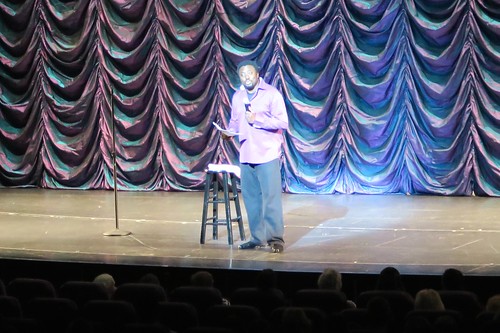 We, and a lot of others, had to leave early for our dinner booking. Unfortunately because we booked this cruise so late we weren’t able to get the early dining (there are 1,100 kids on this cruise so the early seating was VERY popular), and for the first time ever had the late seating, which means we’re eating dinner at a time we’d normally be asleep. 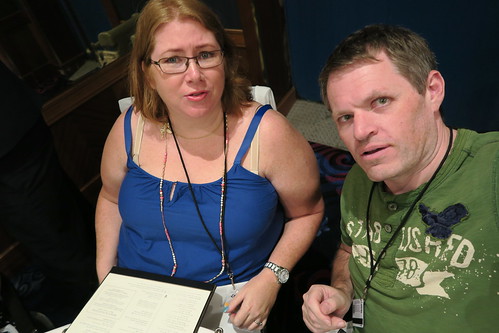 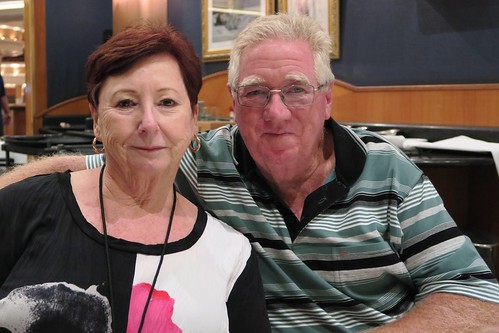 We were on a table by ourselves, tucked into a corner, which is quite nice because it was quiet. I think we all a bit tired after our long day but our waiter was great and the food delicious. I had spinach dip… 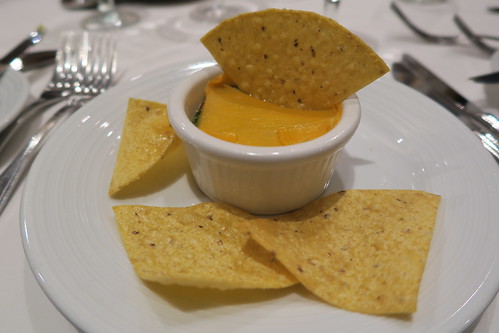 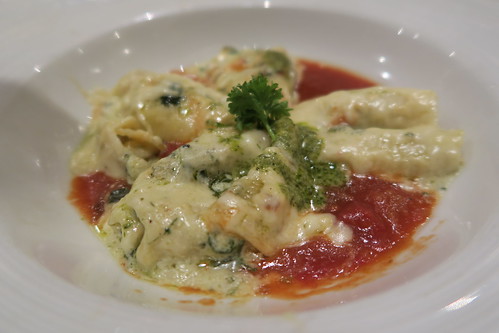 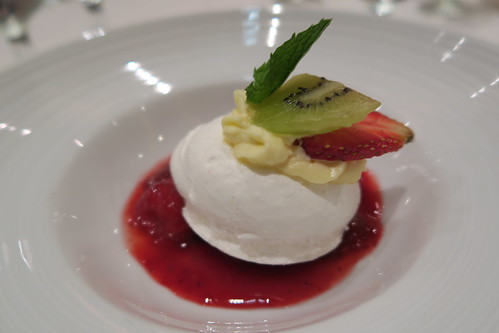 The kids headed off to the teen club and we headed to bed. VERY tired and not feeling 100%. Hopefully after a good nights sleep I’ll be feeling restored and refreshed.