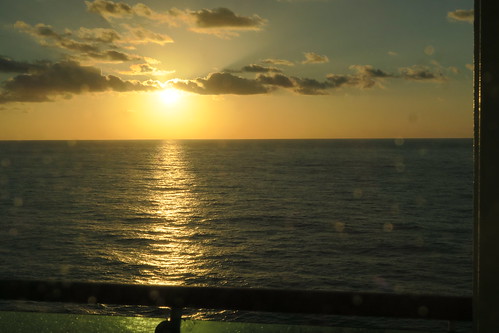 After such a late night I slept in, until AFTER the sun had risen (a very rare thing to occur indeed).  Even though the internet is not the best, we do have it so were able to check emails and I discovered I could upload photos (so I’ll be able to update my blog). At around 8.30am Nan & Pop arrived and the kids arrived (we had phoned them a bit earlier) and we all headed to breakfast at Windjammers. Unfortunately it was really hard to find a spare table (something we’re continuing to deal with so many kids/families on board). After breakfast we went to morning trivia in the Schooner Bar. 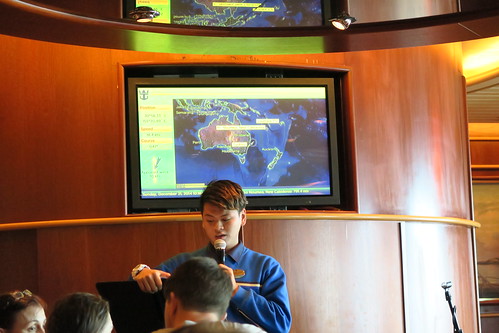 Christy (& Kevin) named our team Ponies Galore. We did okay – though I have to confess it was Kevin (& Athena) who got most of the questions. I think I knew about 4. The winning team only got 15 so I feel okay about our score :-). 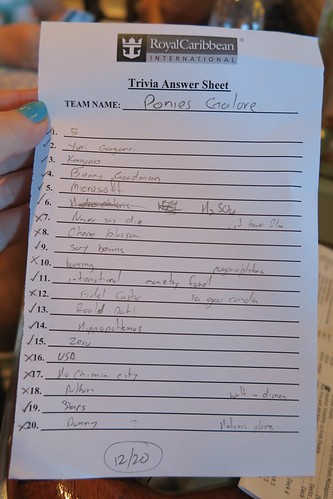 I’m writing this up 2 days later so I have no idea what we did after that. But after the business and noisiness of Windjammers for breakfast, we decided to go the Dining Room for lunch.

I had fiesta salad, eggplant in pastry and chocolate & raspberry tart – all of which were delicious. 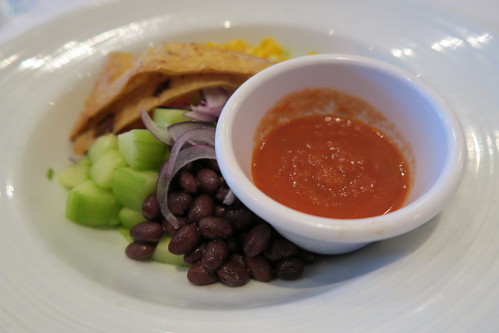 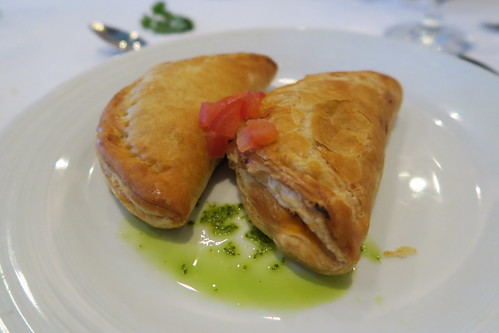 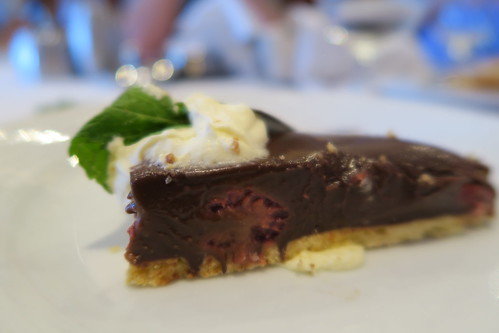 After lunch we went to the Solarium (adults only pool) for a swim, spa, mocktail and relax.

Then it was time to relax in the cabin a bit. And take some photos on our balcony. 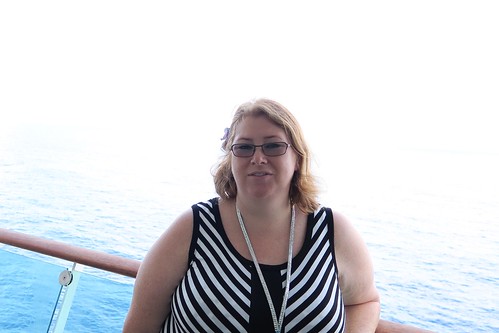 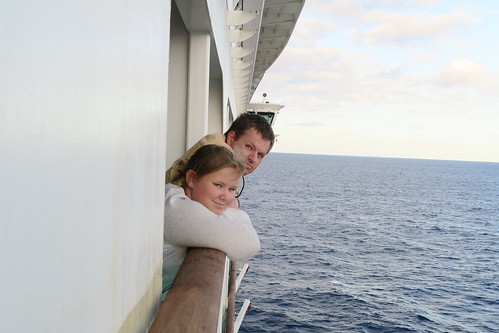 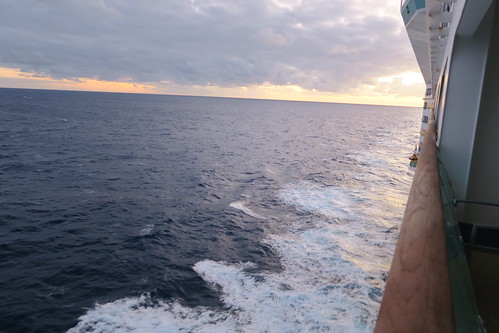 Then tonight we got all glammed up for Formal Night. We did have a professional photo taken of all of us, but I love this windswept one we took on the balcony. 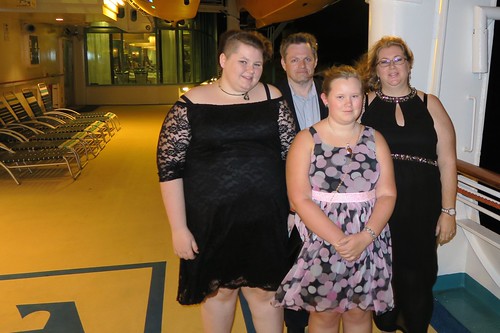 We did take more of our own but the lighting wasn’t the best. 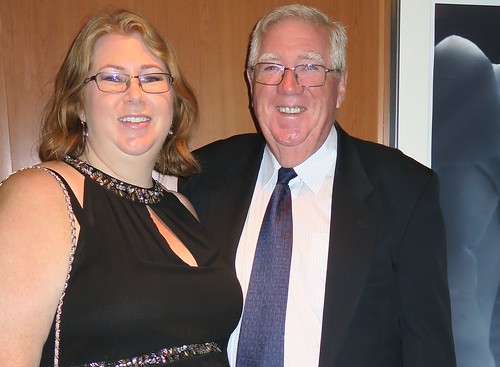 At 8.30pm it was time for dinner. Vegetarian selections were few and far between tonight but I did enjoy this lovely dish with artichokes. 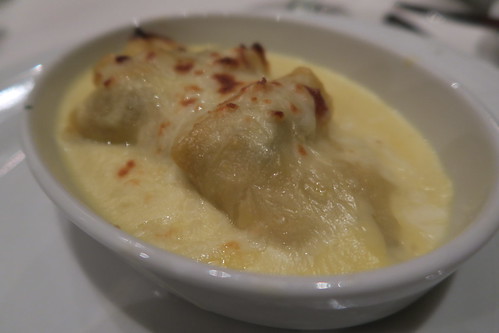 and a cheese plate for dessert. 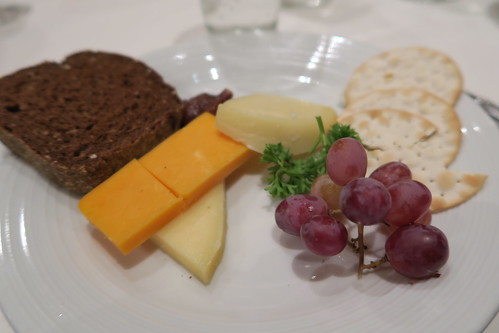 We then said goodnight to the girls, who were off to the teen club, and went to the theatre. 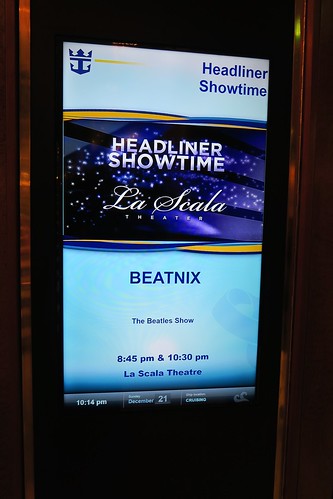 The Beatnix were great. Sounded EXACTLY like The Beetles. 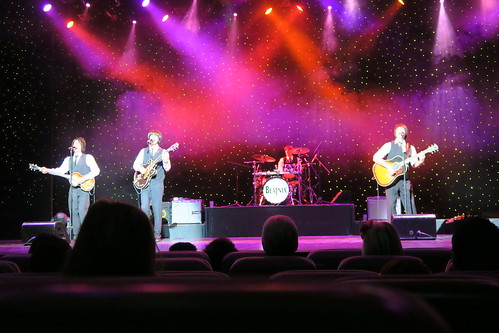 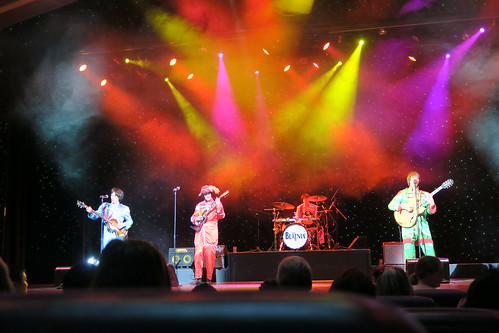 After the show it was getting on towards Midnight, so it was back to our room, where we found this cute little guy. It was straight to bed, I read a few lines of my book, then it was off to sleep. 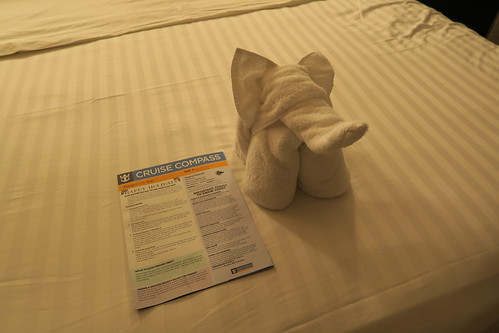