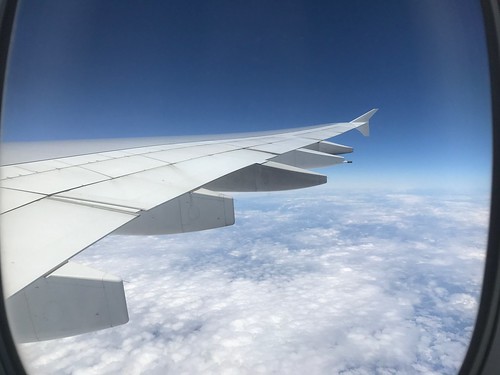 After planning all year, the big day finally arrived and it was time to head to Orlando and WDW on 24th November – aka Thanksgiving Day (in the USA). I was awake about 5am (not unusual for me) and by 7am we were all dressed and packed ready for our pick up at 7.30am. We said our farewells to Mum & Dad, and the pups, and we were off. It was a little squishy in the car but we managed – excitement to be finally on our way probably helped.
Luckily we had no traffic on the way to the airport and arrived just before 9am. Checking in was a breeze. Even though we had an American Airlines flight number, since we were flying on a Qantas plane we were able to use Qantas Club check in and skip the longer line. We also scored because the lady checking us in was able to move our seats (back to what I had booked a few months ago – before Qantas kindly moved our family to all be seated together – which isn’t what we wanted). Kevin has to have a window if he has any hope of sleep and I was trying to have a bit of extra room for everyone because the plane wasn’t full. So once Kevin and Christy were moved it meant Athena and I had 2 spare seats between us. Christy was just across the aisle from me (good because she likes to chat) and Kevin was a few rows back at a window (and a spare seat beside him).
Unfortunately by the time we went through customs and security and a shop (Athena wanted to buy a gift for an American friend), found we couldn’t use Qantas Club (because of our American Airlines flight number – which I had thought might be the case), and tried to find somewhere to get something to eat, Athena was in a LOT of pain (and the noise of the airport was intolerable – but luckily they just put on their noise cancelling headphones and that helped). We did find somewhere to order breakfast and Athena and I went to sit down while Kevin waited for our order. I had a cheese, egg and tomato jaffle, which was rather yummy – not a combination I would normally order. We then got a few drinks/snacks for the plane and it was time to head onboard. Poor Athena though was in so much pain by now so it was good they not only had extra leg room (no seat in front) but 3 seats to lie across. As for myself, I was doing pretty well. 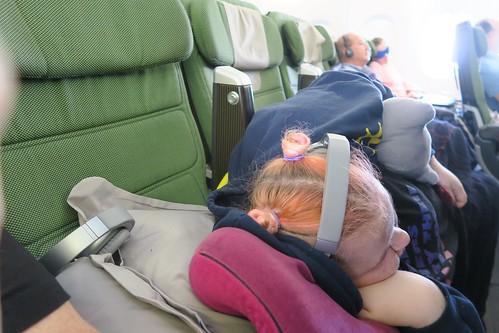 Travelling on a long haul flight, we discovered, is not the easiest for suffers of fibromyalgia. 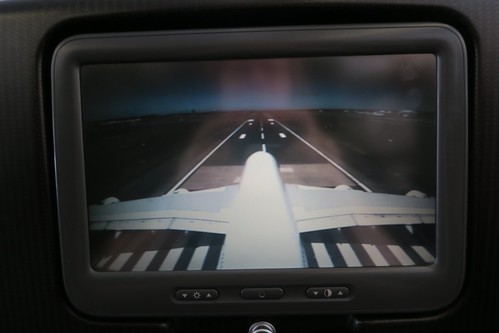 We flew on the A380 so the plane flew pretty spacious and were served lunch shortly after takeoff. 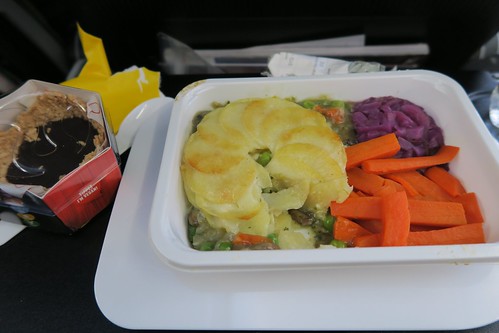 I read for some time before watching a healthy food documentary. While we didn’t get dinner, we were served a panini for a snack before the lights were dimmed. Athena had managed to get some sleep but didn’t eat much (as their stomach was unsettled). 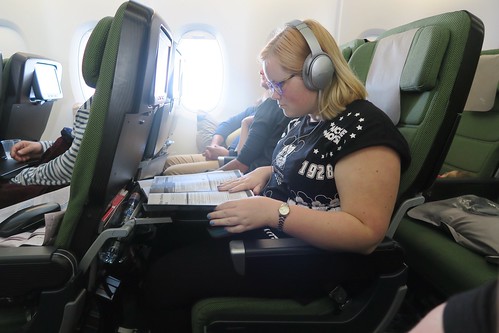 I was able to get a few hours sleep and awoke just before lights went back on for breakfast. Christy was asleep then but had trouble sleeping so didn’t get very much.
The hash browns and homemade baked beans were yummy, the eggs not so much. Surprisingly the 13 hour flight seemed to go rather quickly. We arrived at LAX just after 6am (local time) on Thanksgiving Day. 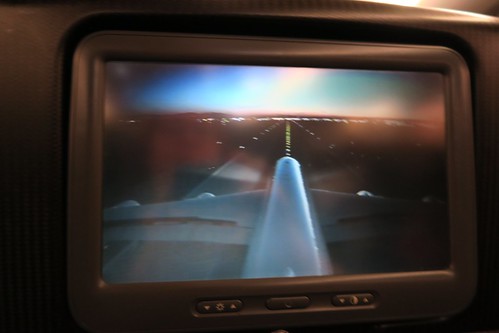 When I had booked our flights there was only 2 hours before our next flight to Orlando, which would have meant express customs/immigration but that flight had been cancelled and we now had 4 hours before our flight, which meant a much slower process. Again, this meant Athena ended up being in a lot of pain. This had been the part of the time I had been most worried about when my fibre pain was at it’s worst so I knew only too well what Athena was experiencing. In hindsight we should have requested a wheelchair. Which is what we ended up doing once we had cleared immigration (which took some time because only I got immediate approval from the self-serve terminals), collected our luggage, finally got through customs, dropped off our luggage (which was checked through to Orlando) and walked the thankfully short distance to the American Airlines terminal. Poor Athena could barely stay on their feet by this time so it was relief they could sit and be wheeled though security and all the way to the gate. Obviously with Athena only being diagnosed with fibre a few weeks ago, and this being the first big trip since my diagnosis, we still have a lot to learn about travelling with this stupid illness. 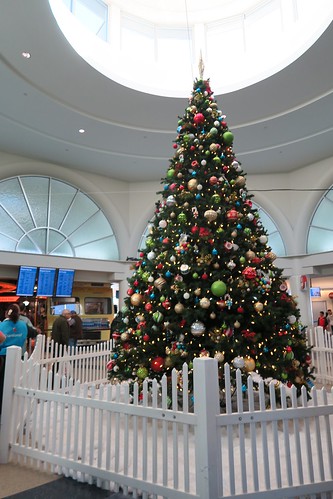 After resting up for a bit and Kevin changing the sims on our mobiles we went in search of more food. Even though we seem to get fed often on a plane the meals can be quite small (or you only eat a small amount) and you end up missing some meals (like we missed dinner but had breakfast in the middle of the night (Australian time). 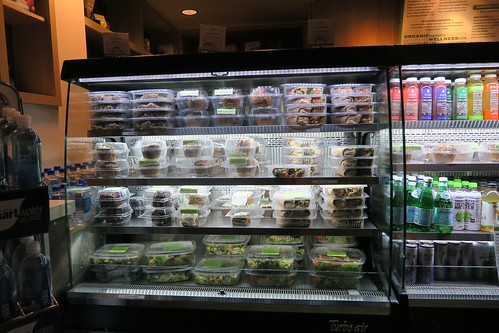 I was SUPER excited to find a place selling all plant based meals but then it was hard to choose what I wanted. I ended up with a delicious wrap, which I ate half of, then half later on the plane. 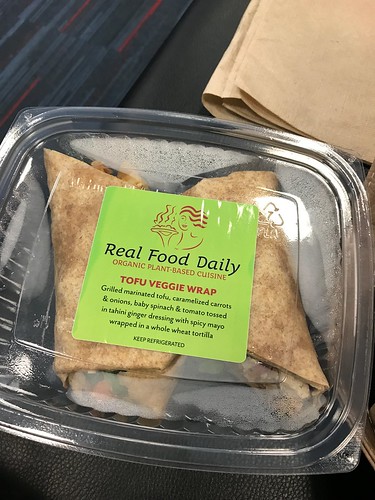 Everyone else had something from Dunkin’ Donuts. We then had about a half hour wait till boarding time. This flight was full so no spare seats and I was in LOT of pain by now but was thankfully able to sleep for much of the flight. As was Athena and Christy. Kevin got a little more. 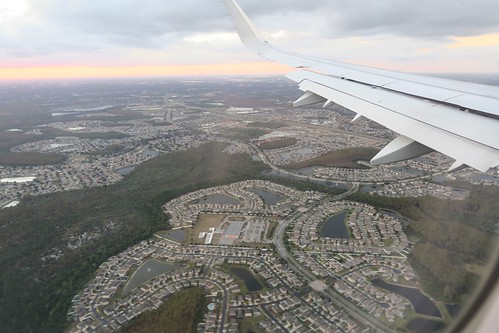 Then finally it was time to arrive in Orlando. 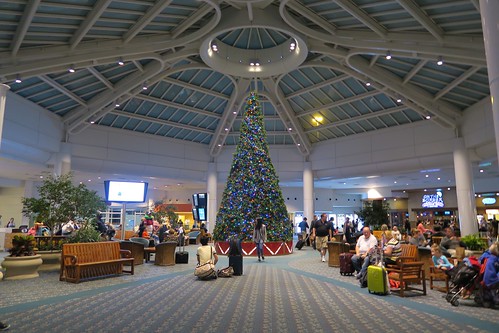 Much easier here as we just had to catch the monorail and pick up our luggage and hire car. Unfortunately here we ran into problems as even though I had booked months ago, there was trouble finding a car (people mover) for us. We waited at the desk for some time before getting our paperwork and heading over to the parking garage. Instead of a 10min wait for the car, it ended up being a 60min wait (not fun after travelling for over 27 hours). There were no seat but two wheel chairs which Athena, and later I, took advantage of, while Christy sat on the ground. We were all hungry and very tired and just wanted to be on our way. 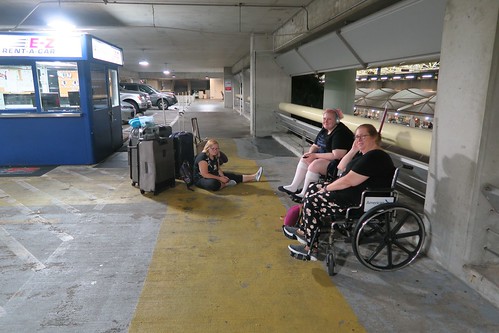 Finally the car turned up and we headed off. Being that it was now 8pm we decided to just head towards our accomodation and find dinner on the way. We found an IHOP, which I thought would be quick, but being Thanksgiving turned out not to be the case and we didn’t end up eating until 9pm. 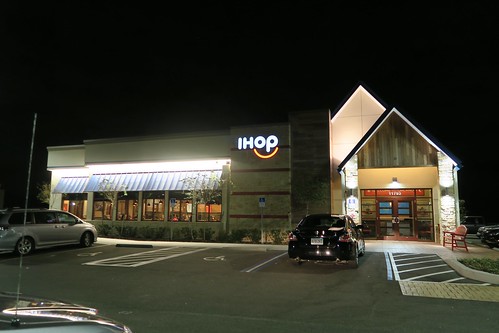 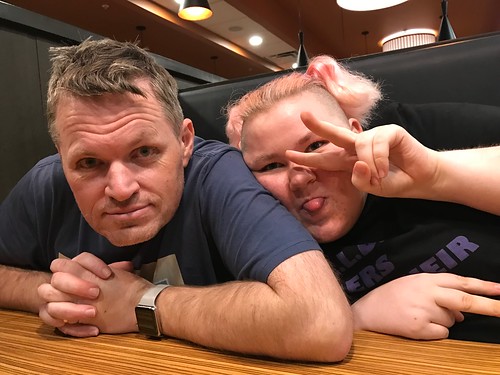 Thankfully though (no pun intended) we all really enjoyed our food. 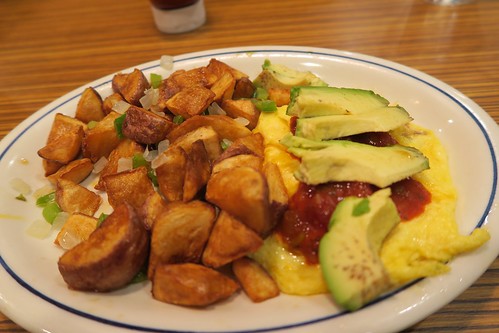 Then it was just a short drive to our accomodation for the next two night – the Caribe Royal Villas. 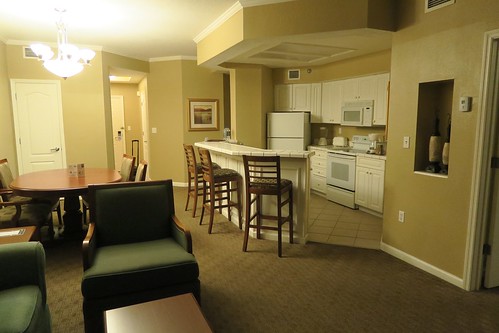 The kids still thought we were staying in a hotel room with just two beds. The foyer was breathtaking, with a lovely gingerbread display. Luckily check in didn’t take too long (though longer than we would have liked) and finally we could surprise the kids with this room. They were thrilled to have their own beds and all the space. As were Kevin and myself – our bed/bathroom is massive. 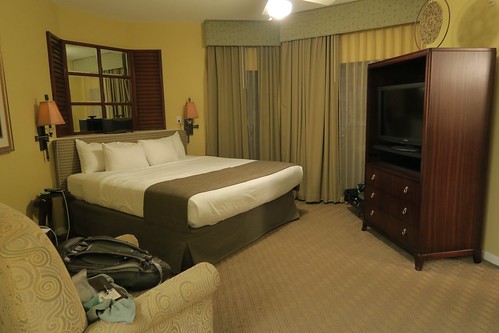 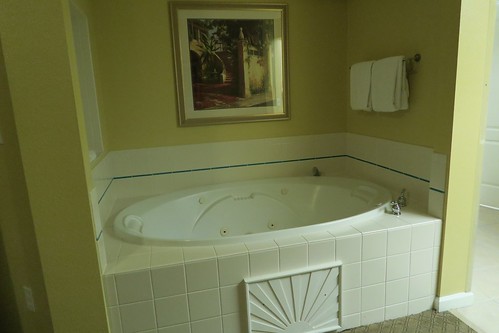 The place is very similar to where we’ll be staying the rest of time at WDW so it feels rather like “home”.

Finally around 11pm we were all showed and off to bed. Ah, not so quick, as Christy had fallen asleep in the bath and Athena was unable to wake her, so I had to shout her name and rattle the door till the she woke. Then it was time for me to finish off my book and go to sleep.