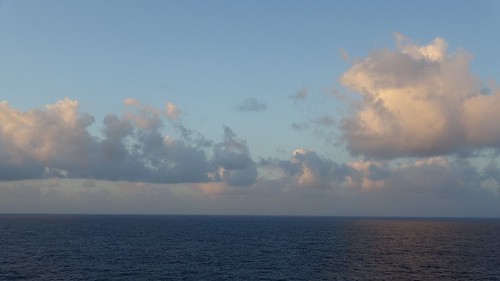 A sea day always means not a lot of photos and much to blog about. But it also means a nice day of relaxation. 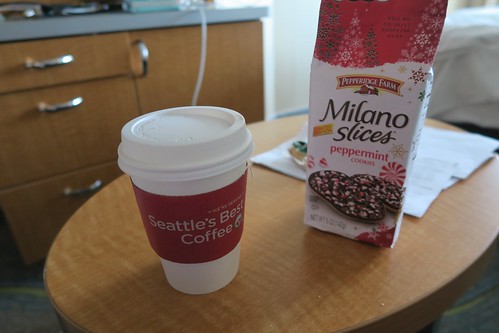 Kevin was kind enough to go and get me a cup of tea, which I enjoyed with some biscuits. 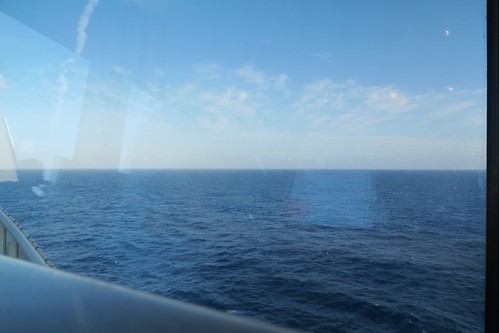 We headed up to breakfast in Windjammers about 8am (minus Christy who was still asleep). I hardly ever eat eggs these days and these were cold so remained uneaten (sadly). I did enjoy the fried rice and potatoes. 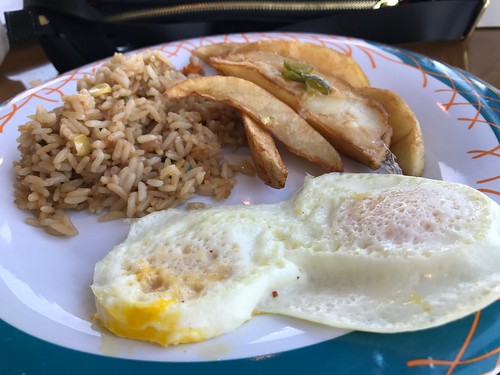 I was also very excited to see they had the chocolate donuts I had always loved so much. I forgot that they had changed the recipe and I no longer really like them. I had a few bites and left the rest. 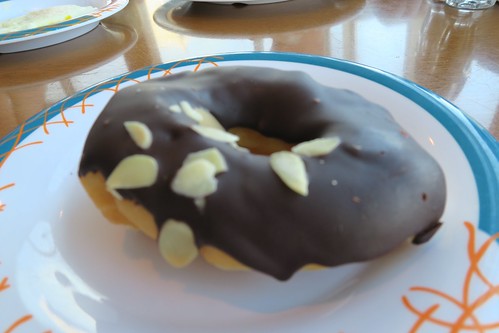 After breakfast we went to explore the boardwalk. On the way we admired some the art works (for sale in the auction) featuring golden retrievers. 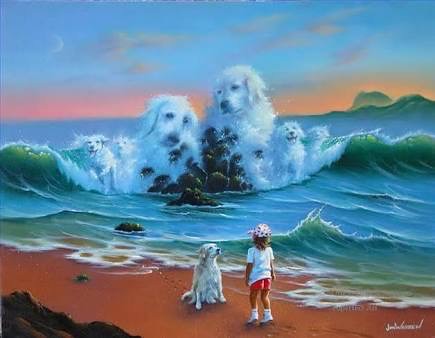 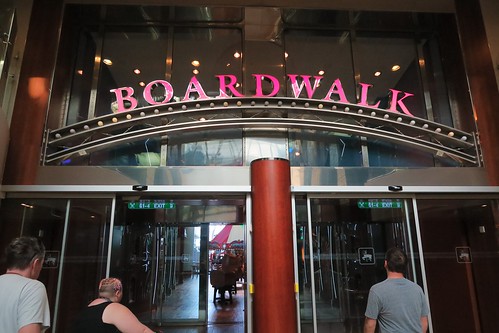 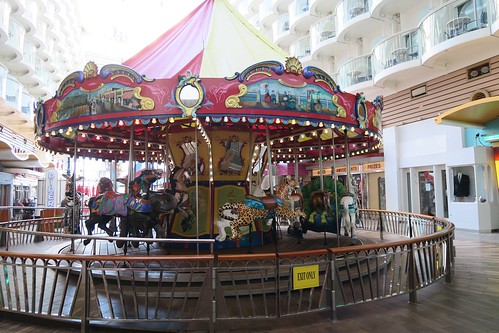 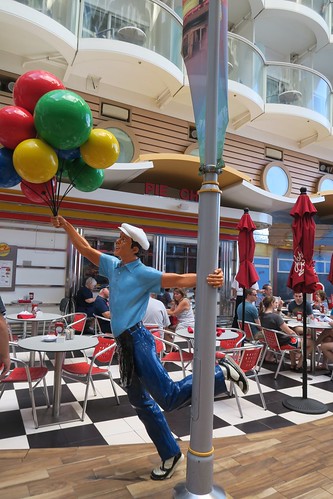 Just after I said this was a great  area for kids I noticed Kevin was already playing on it :-). 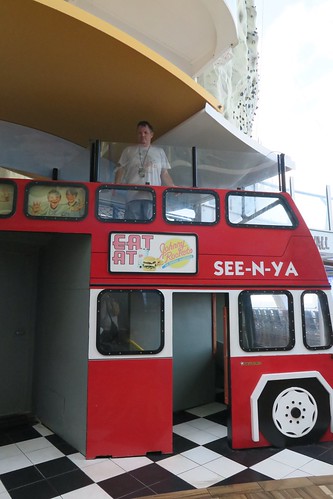 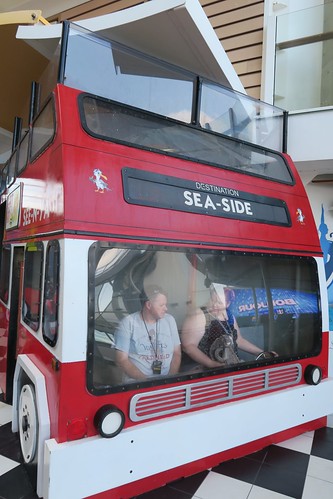 Such a cute, fun area that you’d definitely not expect to find on a ship. 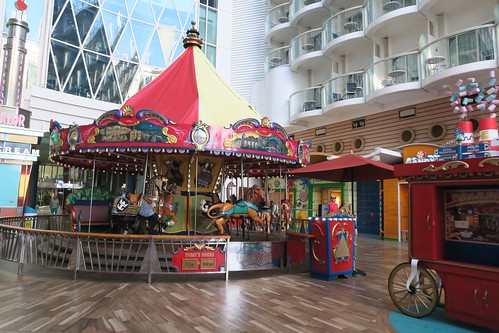 Kevin wasn’t the best this morning and Christy wasn’t hungry so just Athena and I went to lunch at the American Icon Grill – which is just liking the dining room on other RCL ships. 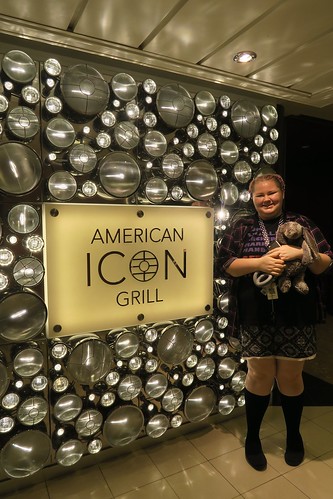 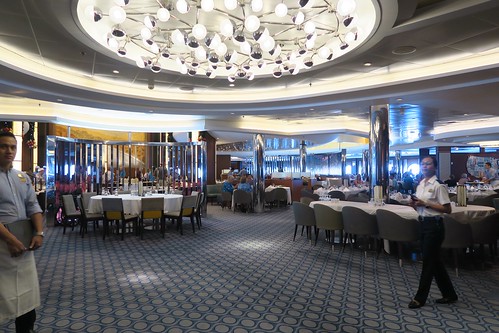 Here you can order from the menu or get stuff from a small buffet, which includes a salad bar. 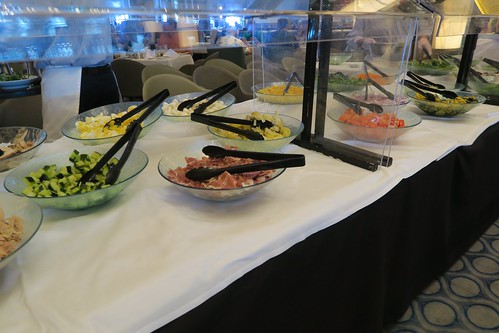 We chose to do a bit of each. 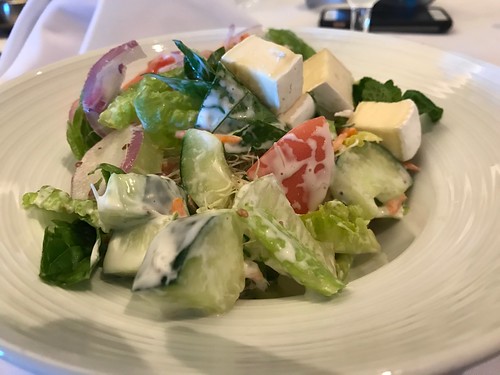 Having no idea how big the menu lunches were !!! Obviously I had to leave a lot of food. I had also (mistakeningly) ordered key lime pie for dessert. It was nice but too sweet so I only had a few bites. 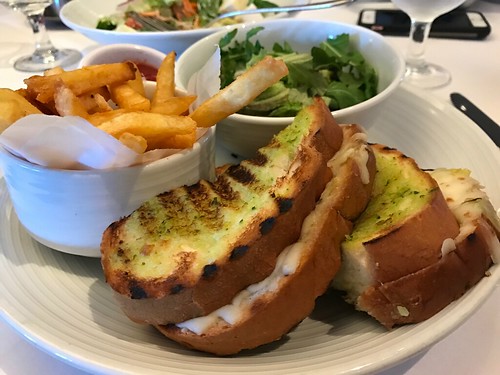 Love this piece of art that was near our table. 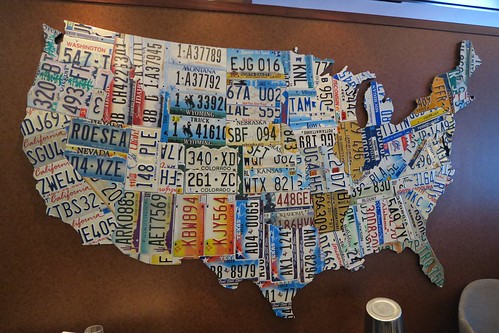 After lunch we went back to the room, then Christy and I went to the solarium pool for a swim. Such a fun pool – very small, but little fountains and shower and the water the perfect temperature. We were in for quite a while before we got out and laid on a sun lounge while I dried off. 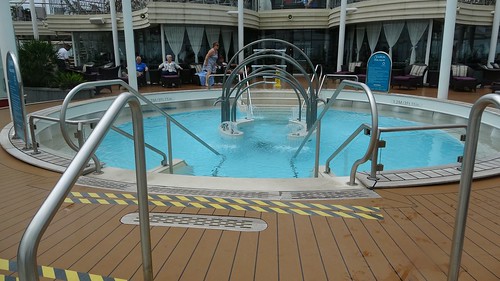 It was a funny afternoon with rain showers/clouds passing over and then the sun coming back out. I sat out on our balcony reading for a while when I got back. 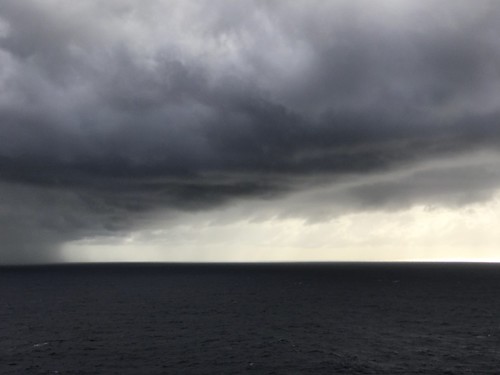 We went to the dining room again for dinner and I was again disappointed in the vegetarian options. At lunch today there had been two veggie options for the main dish. Tonight at dinner there was only fruit salad for the starter, and one dish for the main. It didn’t appeal at all so I just got mashed potatoes, a baked potato and some veggies. 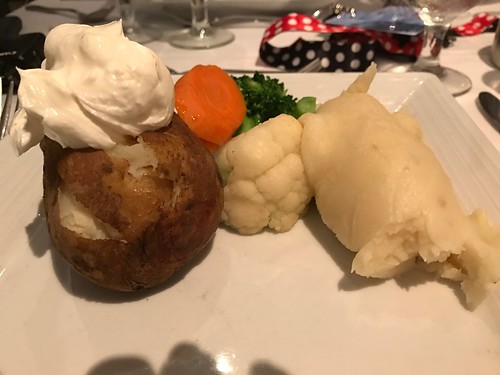 We were supposed to see the ice skating show tonight but were too tired to stay up for it. Christy went and said it was very good.

I was trying to work out why I’m struggling more with tiredness on this cruise and then realized this is the first one since I’ve been on cymbalta – which has really caused a lot of sleep disturbances. On other cruises I would sleep through every night but now that only happens every couple of nights :-(.