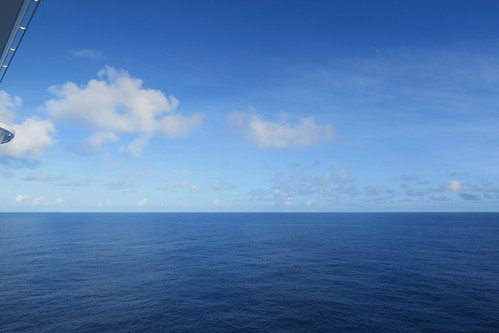 Another beautiful day at sea. I was awake about 4.30 and let Kevin sleep in. Athena turned up just after 7am. Kevin was kind enough to go and get us tea/coffee and we hung out in the room until we got hungry enough to go in search of breakfast.

Today we went to Central Park… 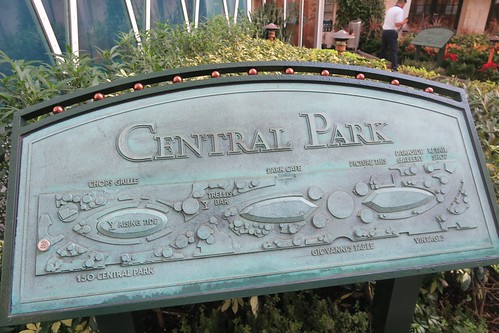 You definitely don’t feel like you’re at sea in this area. Much as I loved the area I’d rather see more ocean when I’m on a cruise. 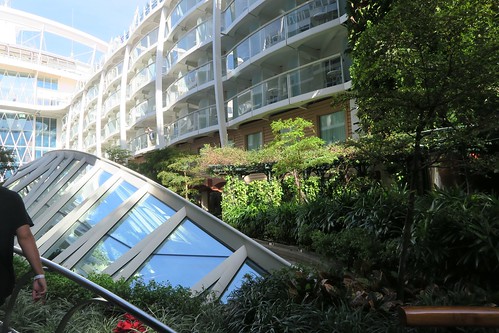 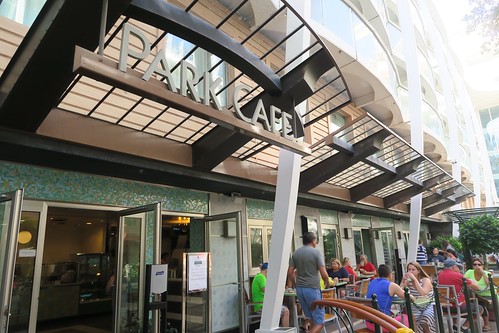 We had breakfast at the Park Cafe, where Athena and I were very excited to find a bagel bar… 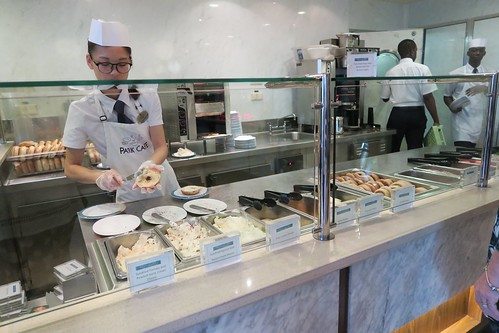 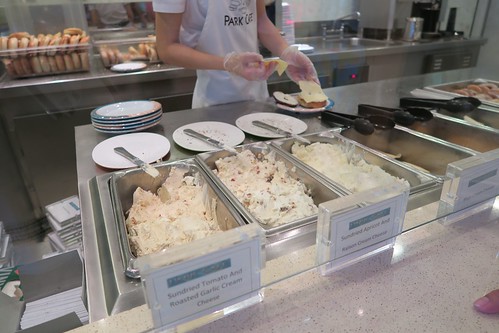 I had an onion bagel with the sun-dried tomato cream cheese. And it was AMAZING!!!! I actually went and got a second one to take back to have in the room :-). 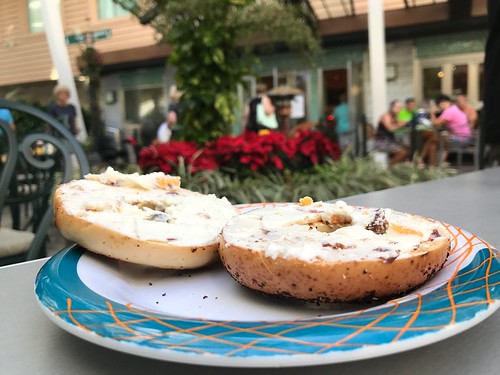 We assumed all the bird noises were fake until a real bird came to visit Kevin while we were inside. We actually ended up spotting a few real birds. Not a bad place to live I guess :-). 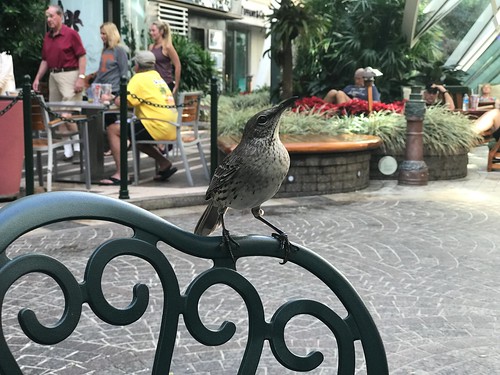 After breakfast we headed back to the room where our bed had been all nicely made. I rarely see it like this as Athena tends to lie there while I sit on the couch (better for my back). 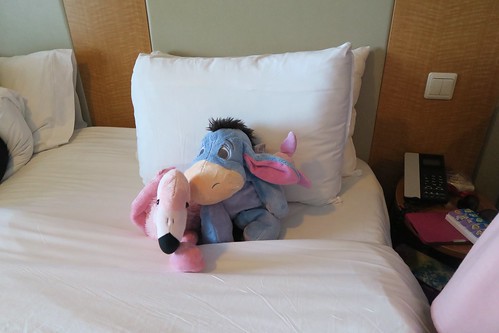 We finally saw Christy around 11am (she’d been out at teen club last night). Unfortunately I ended up with a killer headache so we closed up the blinds (mostly) and I lay on the couch and watched youtube for a bit. Thankfully by lunchtime I had improved a lot.

When we finally went to have lunch at the American Icon Grill (ie. the dining room) we discovered we were too late – it shuts at 1.15pm (I thought it was 1.30pm) so it was back to Windjammers for us.

I had minestrone soup…. 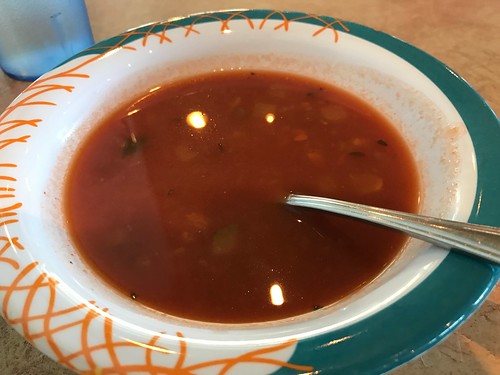 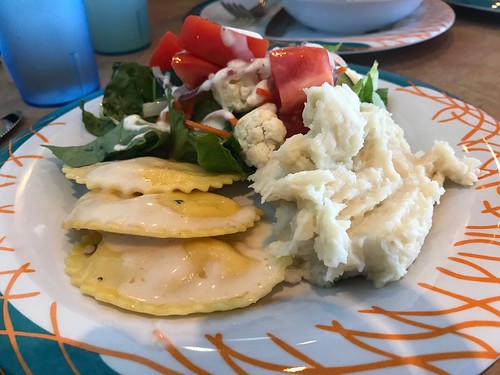 Kevin didn’t feel too great after lunch so we waited a bit and then headed to solarium without him.

After a swim in the rather crowded little pool we lay out for bit, Christy and I sharing one of the comfy lounges looking out the front of the ship. 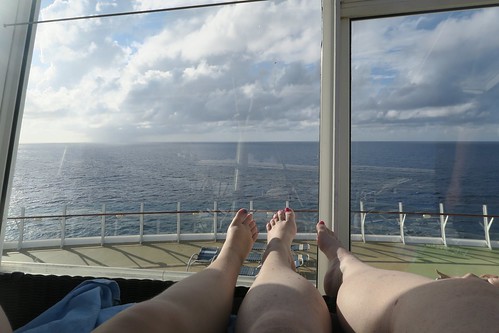 When Kevin joined us I moved to find a seat with him and I finally got my virgin pina colada. 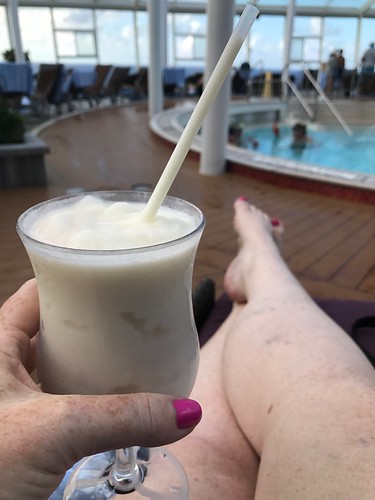 Back in the room the vlog for day 6 was finally ready to go public. I then watched some more vlogmas videos.

Just after 5.30pm we decided to go to the dining room for dinner so we ended up being a little late. Kevin refused to change out of his shorts and t-shirt, even though it was formal night. But was refused entry into the dining room in shorts and had to go change into long pants.

Like always there wasn’t much to choose from. The main veggie tonight was pasta, which I’d had at lunch, so I just ordered the veggie crudites and dip (from the kids menu)… 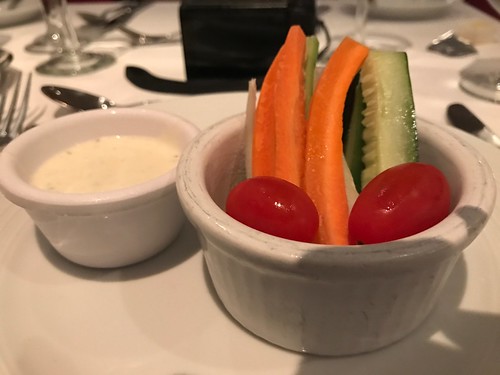 and potatoes and veggies (again). 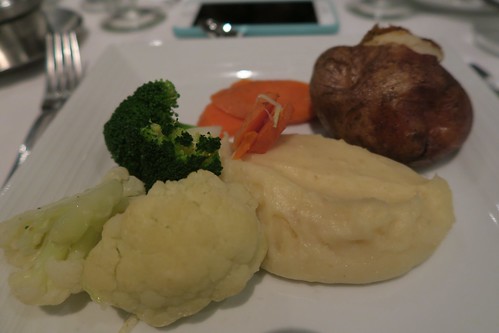 I was so tired at dinner and yawned the whole way through it, so it was right to bed when we got back. I tried to read but was falling asleep and I think I was asleep before 8pm – which is early even for me :-).